How Mirrors are Made - Then and Now

We all use mirrors every day and so it is easy to take them for granted. Most houses feature several mirrors and it is hard to go anywhere without walking past mirrors all the time. It is difficult to imagine what life would be like without mirrors. How would we ever do our hair, check our outfits or apply our make-up? Mirrors are indeed so useful that mankind began creating them thousands of years ago, although not in the form that we benefit from today.

HOW WERE MIRRORS MADE IN THE PAST?

It is likely that people first observed their own reflections in water and may have used bowls of water as primitive mirrors. The earliest solid mirrors were fashioned from polished stone such as obsidian (Fig.1). Obsidian is a volcanic glass which produces a good reflective surface when polished up. Examples of such mirrors have been found dating back to as early as 6000 BC in Anatolia (Turkey). There is evidence that by 4000 BC metal mirrors were being used in Mesopotamia (modern Iraq) and these were crafted from copper. Bronze mirrors were used in China from 2000 BC. 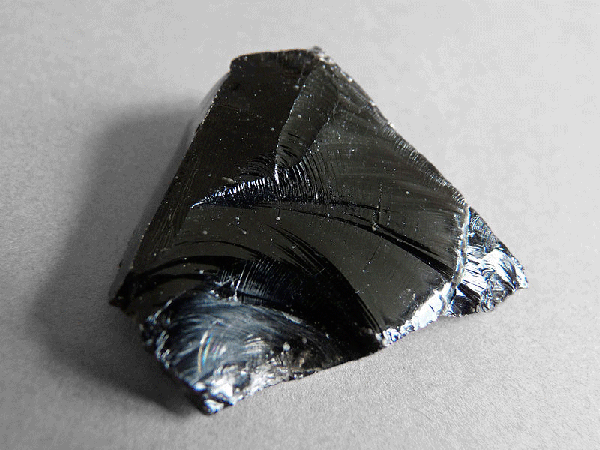 The first metal coated glass mirrors are believed to have been invented in the region that is now Lebanon during the first century AD. Through war and international trade ideas inevitably travelled from region to region and so it is no surprise that the Romans then developed a technique for coating blown glass with lead. From this point on, glass was the chosen substrate for mirrors as it was affordable, rigid, easily shaped and completely transparent.

So the basis of the modern mirror had been discovered by the first century AD but the metal coatings were costly and it took time and skill to make the mirrors. They therefore remained luxury items which were beyond the means of ordinary people. For mirrors to become affordable a more efficient manufacturing process was required and production needed to be on a commercial scale.

The process of coating mirrors with silver-mercury amalgams began in China as early as 500 AD. A superior method of coating the glass was developed in Europe during the Renaissance. This process used a silver-tin amalgam. The precise details of how this process evolved are unknown but during the 16th century Venice, already famed for glass making, became a centre of mirror production using the mercury coating. The mirrors were still expensive luxury items that only the wealthy could enjoy.

The secrets of the mercury coating process eventually spread across Europe, largely due to industrial espionage! Mirror production became industrialised making the products far more affordable but the toxicity of mercury was a problem. In 1835 German chemist Justus von Liebig invented silvered glass. Here a thin layer of silver was deposited onto the glass via the reduction of silver nitrate. The process was refined to allow for mass production and mirrors became much more affordable.

HOW ARE MIRRORS MADE TODAY?

Modern mirrors are largely produced by the wet deposition of silver or aluminium. The process begins with the cleaning and polishing of the glass substrate to remove impurities and contaminants. The glass then requires a series of coatings beginning with tin chloride because silver will not bond directly with glass. The glass is then coated in silver and a chemical activator is included to harden the metals. A layer of copper is added for durability. Paint is applied to protect the metal coating from damage before the mirror is acid washed and heat treated to complete the manufacturing process.

WHAT ABOUT DECORATIVE MIRRORS?

Mirrors don't have to be merely functional items. They can also be wonderful decorative features for interiors. Bevels, gilding, etching, multiple facets and ornate frames can produce stunning pieces which are truly works of art. These mirrors are the result of exceptional design skills and complex manufacturing processes that we will discuss in more detail elsewhere. Suffice to say that a great mirror requires much imagination and a lot of work!

We really shouldn't take our mirrors for granted! Even the most simple, plain mirror is the product of a long history of human endeavour and scientific research not to mention a refined manufacturing process. We use mirrors constantly to simplify every-day tasks, they have many scientific and industrial applications. They can even be treasured works of art. Life just wouldn't be the same without them!

Added to your cart: